Anand 'Kav' Kaviraj is our comic book guru and comic book artist. He has made a discovery regarding Jack Kirby's improper use of quotation marks.

I've been reading Jack Kirby's bronze age DC titles where they let him write, draw, AND edit the books. That was a big mistake because Kirby's use of quotation marks was deplorable. He scattered them everywhere, in a nonsensical manner. I ignored it until now but he went to far in an issue of Kamandi: The Last Boy On Earth! Kamandi is fighting some robot cops and Kirby has him thinking, "First, I'll borrow this "pseudo-cop's" pistol...". Because he put "pseudo-cops" in quotes, that means they're NOT pseudo-cops, but REAL cops which they're NOT. DC: KIRBY NEEDED AN EDITOR!!!! Yeesh. 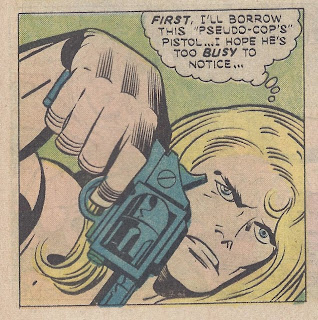